My youngest has a Samsung Galaxy Tab 3 Kids edition which she loves dearly, despite the fact we restrict it's usage to 30 minutes a day, well despite the fact she wants more time and on occasions she'll be allowed an hour. Despite this her technical mind likes to play and mess about and tries her best to bypass the password. This does mean that she locks the tablet up from time to time, normally this is a quick thing to fix. Well today was not a normal day.

She locked it good and proper this morning and nothing I could do could get it to unlock. And Samsung's UI made it even more difficult. Not a single warning or error which put me into panic mode, thinking Google's algorithms have deemed the device as lost or stolen, especially as it refused to accept the account and password paired to the device.

I won't lie it's a gut wrenching moment when you think it's going to need a factory wipe especially as we may lose free bundled apps on the device, doubtful but worse has happened in the past.
On checking the account it works well on a computer so it has to be something Samsung related. Then it hit me like a slap in the face with a giant tuna!

Is the device on flight mode and if so is it visible at this point? 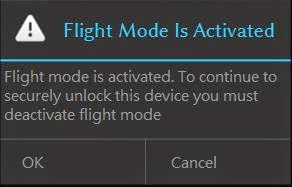 Yes and yes! Am I an idiot and the girls laughed like loons when we realised it was something silly

However the tablet would only tell you this if you turn it off, no warnings or dialogue to inform you of this, even then the power off flight mode option is not clear. Even moreso in Kids mode!

Make a warning similar to the image here especially if a device is locked. It'll fix a lot of hassle for end users who are not as knowledgeable. As stupid as it sounds but giving people basic info may be enough to reduce tech support calls, well maybe!

I'm off for a cuppa!

Paul
Posted by imwellconfusedUK at 07:42