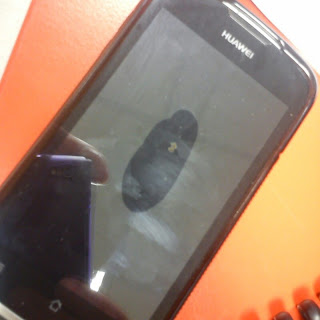 He showed it to me with a similar mark on the screen a few weeks back. I told him to be careful with it while i call Vodafone/Huawei for advice on the matter. as while the bubble was there it was pushing down on the phone causing damage to the display.

On phoning Vodafone they advised me it's a common issue and would be repaired under a standard warranty. Woohoo!  As we'd bought it from a Tesco store I knew It was them who would have the last say but wanted Vodafone's thoughts on it. To Tesco we will go the following day!

Overnight it vanished. That day the screen broke, with lines down one side of the screen. There was no cracking or damage to the gorilla glass I assume this bubble increased in size causing a chip on film for the LCD to fail.

Tesco's phone shop Dunstable have been fantastic throughout they could see the problem and the people we spoke to on the phone in the mini store were also fab. If only they could have booked the phone in for repair and sent it from story It would save the Royal mail cock up.

Royal mail lost the phone, or the phone was lost in a backlog.
Found last week, so I guess it was backlogs. It was fixed and sent back. in a flimsy jiffybag. I kid you not a standard thin jiffy bag, compared to me posting it in wrapped in three jiffy bags for protection that's a fail!

It came back to us Thursday and by Friday morning the air bubble had come back!  So it was off to Tesco again. The phone was obviously not repaired properly. On talking to a lovely lady It was suggested i "post it in sooner next time" When i explained it went missing in the post or was stuck in tesco's backlog she apologized, re-booked it in and promised me all will be sorted properly this time!

I genuinely hope so as I've had to buy my son a £15 vdafone alcatel budget phone (he's in love with it mind you) to keep him connected to his friends. So I'm out of pocket for this. But spare phones are useful the way things are going!

However the bubble vanished again this morning. So I've informed tesco of this. I just hope they repair the issue properly. it looks like the bond between the gorilla glass, digitisr and LCD is too weak, the phone makes noise in your hand too. A sign of poor build quality. Which is a shame as the phone is awesome bar the screen issue. Made more annoying as we've already upgraded his line to a decent sim only deal, we could have got a new phone for him if we knew this would happen!

I've read about it on Vodafone's Eform, Modaco forums, private blogs, the lady i spoke to at tesco's today, and many other online pages. some suggest pushing the back some say get it swapped.

But PLEASE Tesco. Fix it properly this time! For the sake of a 13 year old who needs his phone to keep him going (trust me on this please)

Posted by imwellconfusedUK at 15:10