John Lewis to the rescue!

Operation Bedroom. A grueling monster fueled by the kids needing space and me needing room to blog without the kids turning my desk into a chalkboard, yes. It gets that gruesome at times. That’s without me adding to the mess as well.
I've nearly completed the two areas now, but in tidying up it hit me that I may have messed up. Any clothes washed are left in the living room by my old desk, which is now in the bedroom for taking up too much space, but fits perfectly in the small space given for it in the room. However, through tidy up and putting things in their new place it transpires that Lord Clumsy has broken a few things.
Bar the computer requiring encouragement to work in any way shape or form I found I’d broken the clothes airer. Panic sets in straight away, knowing I’ll be in the doghouse for sure I start looking for a new one, in the hope I can turn it around and buy a new Clothes airer and at the same time gain some brownie points. I looked around local shops and found the same few, poorly built ones with yet another generic brand on each store. Close to giving up it was suggested I try John Lewis, in hindsight I should have checked first. Yes I didn't think of them. 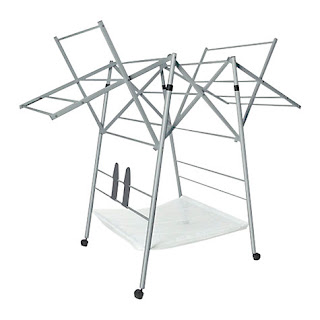 I know what we need from a Clothes airer in this house. It has to be strong enough to fit anything from a huge hoodie to the roof of a child trailer and when not being used to dry clothed it’ll become the support for Blode base alpha, the kid’s dinosaur shark hunting base, or their dragon hotel.
On looking through the many John Lewis sell I was able to pinpoint a few good ones from the customer reviews which made the elimination process easy!
Additionally I needed to get one fast and try and get away with the fact I broke the previous one so it had to be in stock and available to get to me pronto. After all It would be useless of me to buy one if it would not be here when I need it. I would really be in for it. Eventually I chose a large but robust looking one from a well-known brand, what I’d not noticed was it came with a three year warranty. At this price it’s a win. Also next day delivery made the choice even easier.

I got caught out in the end though as the clothes airer arrived while I was on the school run. D’oh!  Luckily I wasn't made to sleep on the couch as the wife had been eyeing a similar model up too. Maybe I should have told her what had happened? Oh well.

Have you tried to hide the fact you've broken something from your significant other and got away with it? If so tell us in the comments below.
Paul

Disclosure:
This post is bought to you in association with John Lewis.
Posted by imwellconfusedUK at 14:16