Britmumslive 2013 the epitome of epic.

Hi all.
Last weekend i embarked on an epic weekend of education, awesomeness, scooby doo, hedwig the owl from harry potter and a laptop. 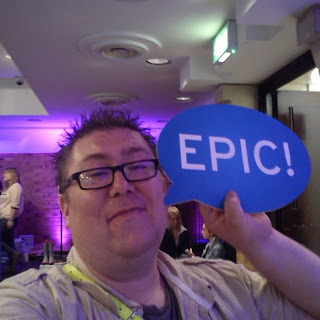 Ok. i got here late. I think today was the oppertunity to say hi to many amazing people. Some of whom know the darker side of me. As a concequence of my poor planning and the fact i'd got my daughters picnic time mixed up the day was a chance to soak it all while bilssfully off my tits on morphine. it is at this moment i would like to mention that i am not a drug abusing loonybin, but they supress spinal pain. Trust me, i'd come fully loaded just in case. (Paracetamol for the saturday hangovers was useful)

I won't lie i felt a tad awkward, a feeling i also experienced at Cybermummy and Cybher, but that soon passed as i met friends and people i'd talked to over the interwebs. very quickly we entered party mode for the BIBS. Everyone who wan was fantastic. especially the amazing ladies heading #TeamHonk who won an award for this awesome effort. Everyone who won was flipping amazing. I eventually got the naughty table and soaked in the rucus. Such a good day.

Getting back to the travelodge in kings cross, I spent most of the evening soaking up the tube trains clattering past, the laughs from the bar over the road and some good music. It didn't help I was missing theJess. Knowing she was about to embark on a trip to Chessington with the kids while struggling with mobility i was a bit worried she would panic or worse. 3am came and i fell asleep to the drones of some classic tunes from Pearl Jam, and an engineering crew train.

On rolled Saturday and by Jove I ran late again, filming on the tube for my daughters as they love the tube so i film every time i get a chance. Even if I nearly get arrested on "security concerns" Only a moose like me can cock it up both days. Thankfully I didn't miss Katie Hall's talk on what happened to her, how she got through it and how she set up a charity. Throughout the talk you could hear a pin drop, literally. She is a monumentally strong woman with an epic attitude towards life. An inspiration to many. She mentioned ever scar is special. I childishly thought of Tow Mater in Cars 2, every dent to him is special as it's a memory be it good or bad.

After this i visited lots of sessions, including a youtube session run by three network partners, sadly the advice given here was awful sorry but. It truly was. Next time I suggest you get tubers like Dibber, Little rich or StevieJacko. People who actually support the community, are partners and willing to offer advice to people. Not tell them to "work hard at it" as it's not always going to work out that way. More on that in another post.
Many other sessions i attended were really good. I learnt a lot, I won't know if it'll all be put to use. But none the less it's a positive thing.
After that it became a blur, of fun friends, butterflies and 'molesting' Scooby Doo, Alex the lion hi fives and lots of banter. Oh and something else to make someones weekend. I kid you not awesome fun.

The brands i met with were extremely friendly, happy to discus all aspects of what they want from blogger relationships, how they want it and if we want to work with them on the future.

The final keynotes were fantastic, but very emotional at the same time. I cried, then helped a few special people. I hope they are ok x.
I had to leave early to meet my partner for 6.40 at kings cross. (I got there early) but this did mean I missed the tribute to Kerry, multiple mummy. Which would have made me cry more. So maybe a good thing. I hear it's on ustream. I'll link to it later.

I leave you on a good note. BritmumsLive. See you next year.
Thank you to the person who gave me a ticket. You're full of win and you rock. I owe you one xx

Paul.
Posted by imwellconfusedUK at 14:51