Re-touching on My n97 mini trial 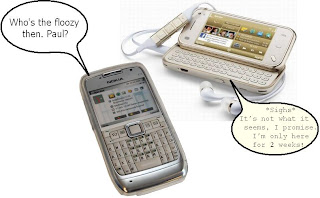 Well i must admit when i wrote my review on the n97 mini. i noted everything i spotted with it, good and bad.
I feel it's time to retouch on this, as a user of 2 Nokia handsets. i feel like i needed to
So let's try again.
The lovely people at WomWorld Nokia (1000Heads) offered me the chance to trial a Nokia device to use with my training, I jumped at the chance. When it arrived i was like a child at Christmas, eagerly waiting to rip it open.
I had a misconception therein i would receive a brand new shiny phone and box. The gave me a used device, still new but had been reviewed by others, this i personally think this is an environmentally excellent thing for them to do for the following reasons
It would be wasteful to ship a new phone to every blogger
Costs would be through the roof to ship a new device to everyone (different with freshly launched devices i would assume, but then they'll be re-used too.)
Now i had a problem when i got my trial device, but not with the phone itself. I have an attachment to my E71, it's been bashed, abused showered by my kids, has 4 keys stickytaped on and it still works. I admit, i LOVE my phone, and find it hard to re-attach from it,
When the N97 arrived i felt genuine guilt, as if i had cheated on the E71 (sad i know)
Eventually I locked the E71 away to stop a catfight, (trust me the E71 would have the N97 in a fight. she's rough as heck)
Now the phone itself.
I want another one, I have had plenty of fun with it. After all, it's a fun device. add the homescreen with live updating widgets over your internet connection and it's a good solid work and play device.
As I prefer to show the world how to do things cheaply I used free applications from Snaptu, Endomondo and the Furtive share plug in's But today we'll look at Endomondo as were here to do so.
This brings up one small issue i had, GPS instablity. it caused confusion with some apps, Endomondo claimed i had cycled down a hill at over 70miles per hour, this would have killed me on this hill, due to how low i had to go to get round one of the tighter corners. (lets just say scraping a £40 pedal enough to spark a little makes me cry somewhat)
But for most people this won't be a huge problem. I was reliant on the GPS for training, which will not be as important now, well it is but more for slow miles and fast miles.
In honesty i want another N97. but won't until the 5230 dies, (if it ever comes back working)
Get one while there still selling
Paul
Posted by imwellconfusedUK at 01:21