Disclaimer - this is a post of my thoughts and ideas, while factual inaccuracies may result they are derived from the information available in public,


Arriva the shires we need to talk.

Over the last week you've announced changes to the Dunstable and Luton bus network with a consultation on at the moment. The problem is Houghton Regis News Desk broke the news of this first.

The Luton and Dunstable Busway made some positive changes to journeys for most of us but said busway misses out a lot of important services for the communities the buses serve. This means more stops for some but for now we have some legacy services left, like the 38 and the 24.

Now for many it's done the trick but the legacy services now suffer with dropping numbers, in some cases I see it's going to become unprofitable for them to run the legacy services as it is without changes. Problem is implementation of said changes made things worse for many, for instance. The 38 still runs, but on a 30 min basis over it's 15 minute basis (face it, one slowdown in bury park and everything bunches, and on the old setup it was really bad)

But from March, they want to delete the 38 and offshoot 39 buses. This will be detrimental to many people, from workers getting to the Woodside estate, parents and children going to schools, the elderly requiring medical assistance or rely on the service to be independent and the disabled/vulnerable who would not be able to make it to the busway due to it's distance or it's lack of options for those who require assistance.

The removal of the 38 (ignore the 39 for a moment please) would remove Ashton square, High street north and Houghton Road from any bus services bar council run ones that are not suitable for many commuters and not under the hiphop multi bus ticket scheme in place. cutting off access to three schools, doctors and dental practices, shops and access for those who require a bus service in specific areas.

Now here's the annoyance for me, Arriva have put a dedicated information page online with a survey but the information they've printed out tells you to go online, so those without internet or without the need for a computer will have no voice, plus the survey expires on the 3rd Feb. This is naughty Arriva.
Now for those offline Arriva have sent CBC Travel choices flyers about the proposed changes but as the staff have to be impartial as it's not being run with help from the hub. So unfortunately there's not much they can do bar pass you a flyer, but sends you to a weblink!

Now the community of Houghton Regis and Dunstable is split on the changes, many don't care as the busway serves their purpose and the others are worried as the 38 and 39 is their lifeline out of the home to town, doctors and other services. We'll not go in circles, it seems that's the Arriva Social Media dept's job.

Me and a few others want to represent those without internet access so their voices are not heard and in doing so wish to meet with Arriva staff to talk about this in a decent manner, the image below show's my fruitless conversation! 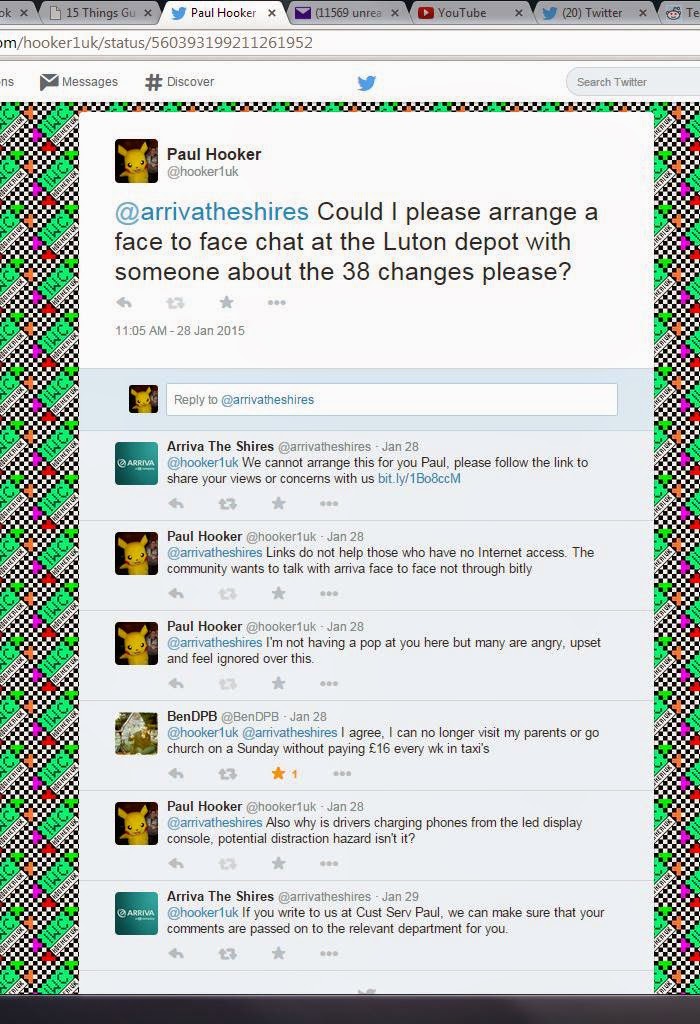 Well for now we have a few days left to spread the word. If you can help join this page, Tell your family who may be affected by the change, and please fill out the survey
I do have an idea for an alternate route which could fix a few issues for both residents and bring a good compromise.  A looped service, using smaller buses. 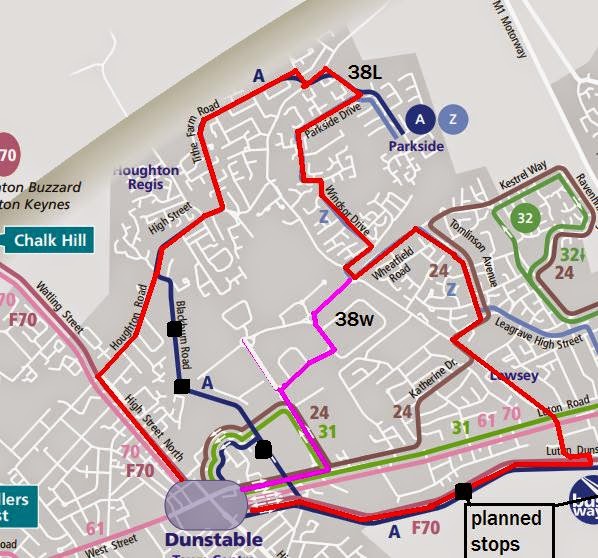 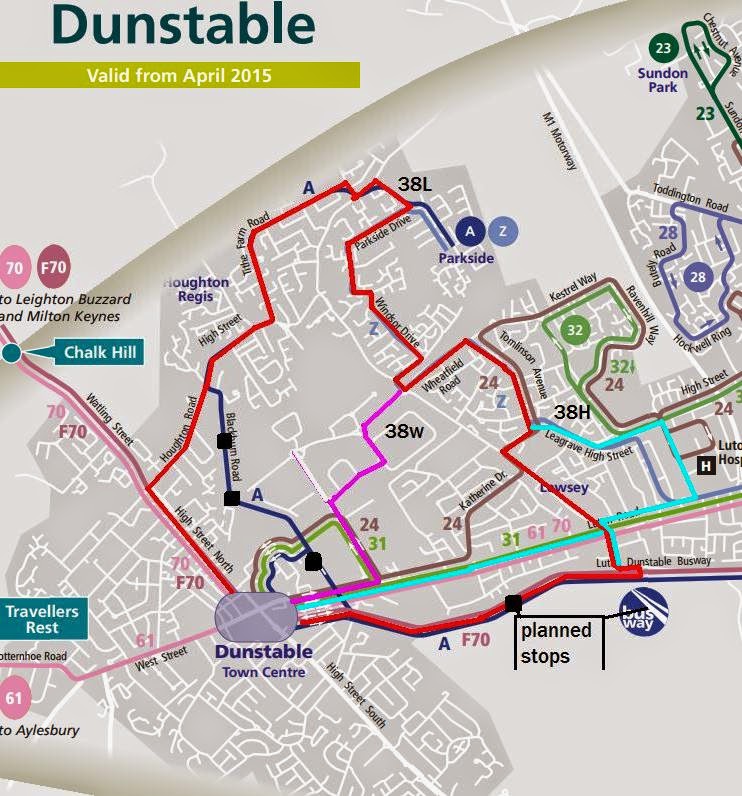 Arriva are trailing 7 electric buses in Milton Keynes, the buses previously used on these routes (according to spotters I've spoken to - this may not be gospel) were smaller vehicles, while the route is under trial could we not move the displaced buses here and try a looped service.

The service would serve Dunstable, Lewsey and Houghton Regis, but only certain buses would serve the L&D Hospital. Also on peak times for workers there could be a loop around the industrial estate.

These respective routes would be the
38L (loops to the busway,) similar route but goes to the busway to get back to Ashton Square.
38W for the industrial estate, missing out Lewsey park (a limited service for factory workers so they can interchange with other buses)
38H (loops to either the busway or the A505.) but adds the hospital into the route, the only one on the map that would actually stops directly outside the hospital.

All of these would interchange with other services on Ashton Square and opposite the Quadrant, High St.North, Dunstable, Morrisons in Houghton Regis and finally Dominic Square, Lewsey farm. meaning more services link up together, bringing more revenue for the company and a potentially better service.


Now before anyone says they want a complete service, it's going to be difficult to get this, especially with costs of operations compared to actual users throughout the day, not just in the peak times it becomes clear things do have to change. I wish it could be the same but this is the consequence of a fast services via the busway being introduced.

If you have something to say about this let us know below, and I'll try my hardest to get Arriva to respond!

Posted by imwellconfusedUK at 14:22