Over the last two weeks I've been using the Vodafone Powered Samsung Galaxy S5 phone and Gear Fit fitness band/smartwatch while doing the #SchoolPedal with the kids and tracking our progress.
I must warn you this is a long one, with no TL:DR spoilers at the bottom!

While the review is primarily about the devices we will be talking a lot about the fitness benefits of the device duo so without further ado, let's crack on with the devices themselves,

The Samsung Galaxy S5 is the SM-G900M Vodafone specific build of the device, be happy in the fact Vodafone have listened to it's customers and left out the bloat, while there is a few Vodafone Specific applications they've not caused me any issue. So rest assured you're getting a good experience from the get go, also Android Lollipop is on the way too!
The handset is a very well crafted desirable phone, with a premium feel, with it's gold leatherette style battery panel to the feint gold colouring etched into the touch panel bezel it oozes class in my mind. It's a good looking phone with some very desirable internal goodness to live it's days out as a perfect companion to you.

Thanks to the amazing people at GSMARENA we've got the handsets full specifications and data from the tests they've done at their labs. We love you guys! 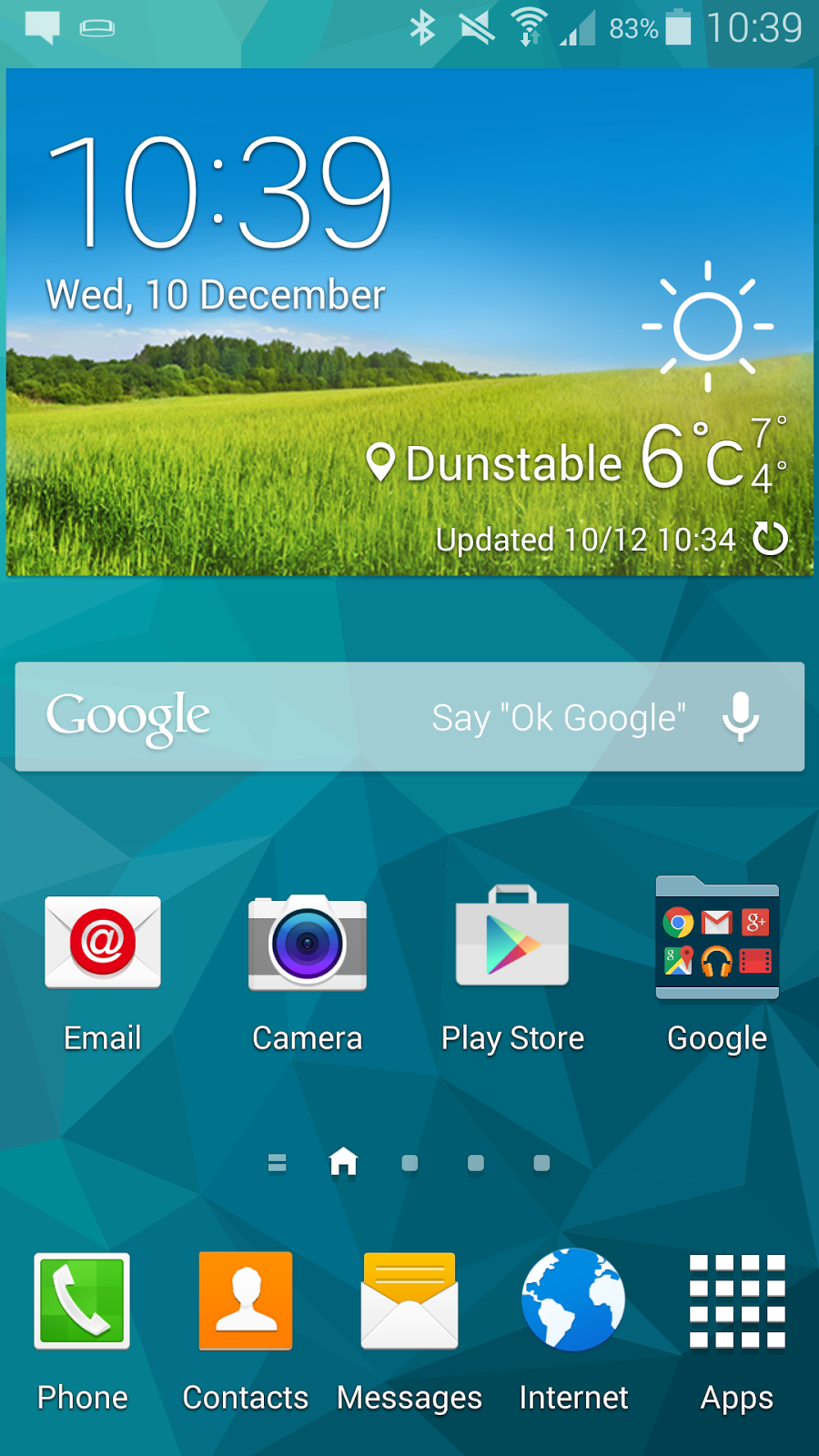 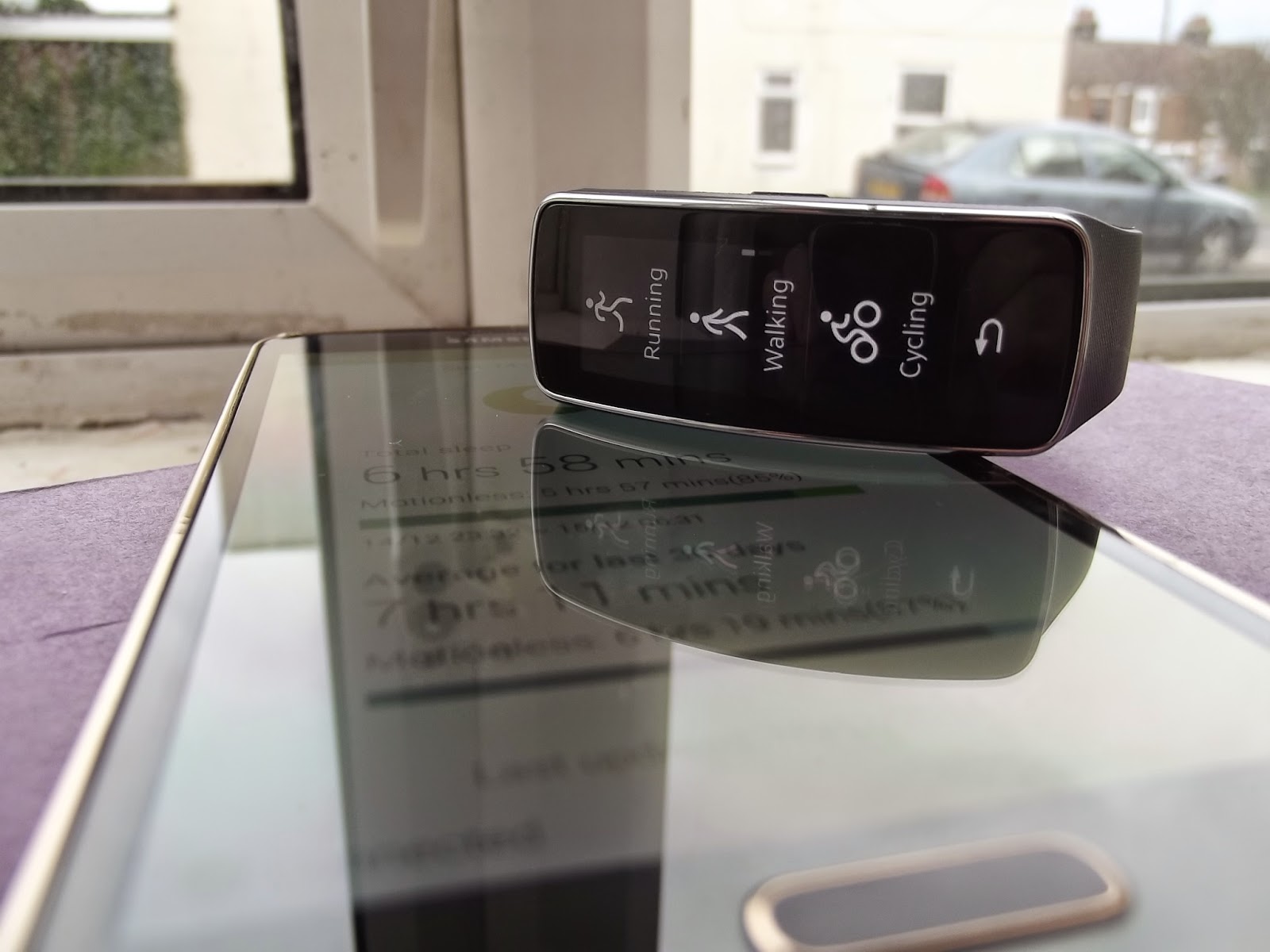 
Now onto the Gear Fit wearable fitness band, before you get excited it's not running android, while many applications are compatible with the band it's more of a fitness companion over smartwatch so please bear that in mind when choosing this.

The Galaxy Gear Fit will only work with 17 Samsung handsets officially so this does put it at a disadvantage compared to Android wear, and similar products on the market, this I feel should change this as it could be a unique seller for Samsung on a wider level.

However where it wins brownie points is the beautiful curved touch-screen, boasting an incredibly beautiful 432 x 128 pixel resolution Super AMOLED display, bringing great brightness, amazingly bright colours and considerably less battery draw compared to traditional LCD Displays. Being curved the device feels natural on the hand compared to some early smartwatches, on top of this it's minimal weight makes it feel more like a watch than a smart companion.

For the rest of this post we'll talk about the devices and how well they work together, while this may mean a part three it's well worth it I promise you now. The SGS5 is a well crafted smartphone with all the power one could need to go through the day and that is down to the generous 2800mAH battery, add the beautiful HD display, ip65 waterproofing, fingerprint sensor for secure payments, UltraHD 4K video capabilities with editor tools and NFC functionality make for a highly desirable powerhouse with everything you could possibly need and want. But we'll get to that in higher detail later in the post.

Before we get into the review I'll explain how it's been used.

I've been using both S Health and Endomondo for fitness tracking comparison, both are free applications with one built into firmware and the other available on the Play store, with Samsung generously offering a years premium service to get you on the way, even for newbies to the pleasure of releasing the endorphins will appreciate such a generous offer. (For privacy of my children and their classmates at school I'll not mention or show tracking data from the daily School Pedal, while some are on-line the tracker was disabled away from the school. Any that pinpoint the school will remain hidden or deleted)

S Health is a one stop well being shop with many, many features not found in premium applications, especially when pared with a Galaxy Gear device or similar fitness band/watch it becomes an ultimate tool kit to aid in achieving or fitness and health goals in life. Now I can't lie I was hesitant to  use S Health due to the need of a Samsung account but once I bit the bullet I actually regret not doing so sooner.
As the screenshots show, the S Health tool show's you're progress through a day with quite achievable goals, 10,000 steps for walking is easy and I beat this target often through the review. Similarly to the goals set for cycling, S Health sets the goal's for you and let's you smash them, and once you do, both devices let you know, by means of a little buzz on the hand or an audio message played through headphones, with the audio messages being notifications of half way points, encouragement when you slow down or seem to be feigning, I promise you now when you're feeling deflated, the bike's brakes thickly coated in a mix of mud and leaves, making every inch moving torture. Just hearing "you're doing great, keep it up" helped so so much the smile came back and I was trying my best to hoon (speed up) it despite the mud causing me the pleasure of slipping and crunching one's chestnuts on the crossbar! Always a pleasant experience.

The only problem I found (and this may be me doing something wrong) was the Gear fit wouldn't monitor my heart rate while riding, meaning my most recent ride/mudfest missed out some information I would have liked to have for comparison, I think this was due to me using the phone to commence the ride rather than using the Gear fit, but I can't confirm this as it went back the same day I was completing the post. I must say though I'm happy Samsung made the S5 and the Gear Fit IP65 water resistant here as they got a little moist in my pocket and muddy on my wrist.

The handset itself runs well, and while I wish some of the Google tools were the defaults here I get what Samsung are trying to achieve here by utilising their own applications. This is done for device uniformity throughout their Android, Tizen and Feature phones so I can fully understand and appreciate the reasoning for this. Many manufacturers could learn from this methodology.


On testing the 16 mega-pixel camera I was impressed, even in the cold it held up well, producing some fantastic shots, with similar quality to the Nokia N8, I've left the images on Flickr as it seems to leave the images as I intended them to look without any editing. Images come out good, despite the autofocus likes the odd slowdown at times but it's caught up as your taking the shot with the shot improving through sheer fluke. On top of that the camera modes are top notch too.
While I didn't play with all modes on trying HDR images came out as you would expect,

Video comes out beautifully with 4K ultra HD capabilities, but I would recommend using the phones microphone over the wired headset's as you'll hear in this video. Additionally the lighting in this shot is not the best thanks to a mix of florescent lights, LED's and natural light coming through the roof lights.

On top of high quality video recording playback is no problem, including 4K UHD clips, playing UHD was easy for the phone while I suspect most users will be watching youtube and facebook videos so for majority the GPU will tick along quite nicely, on this note higher performance games ran with no lag or issues.

Audio and music performance is very good on this handset, in fact it's miles better than the iPhone I have here to pit it against. And I'm not just talking volume here, audio and voice quality is sublime, no doubt down to software and hardware enhancements to improve things on an aural level for all users.
When showing the phone off the first thing friends did was launch the music player and they were very impressed with the quality Even if my choices of music from The Beards, Steel Panther to Lindesfarne could not have been any more diverse.
The bundled headphones sound fantastic, with great all around sound, the Microphone was a bit boxy as shown in the above video, but it's a fair compromise here as we can't have it all

Data access was kindly provided by Vodafone's Red 4G services. Our town is awaiting a 4G boos in the near future so for now we have 2G, 3G and HSPA based services available, with decent speed tests of approximately 2-4MB on 3G whereas H+ on average pulled around 4-6MB. This is about normal for the local area.

GPS Signal took next to no time to latch, even on 2g, this with Google's built in wifi and cell location service disabled for most of the fortnight so again impressive.

Battery impressed me a lot, Many phones won't last two days on moderate - heavy use this did. Impressive when I'm used to charging daily, my only niggle here was the connection, a USB 3.0 plug, I've only used one other device with this jack and didn't like it much at all, more down to the fact I had to concentrate on what I was doing more than normal when connecting the phone to a charger or pc, the USB 3.0 Micro USB port is a slightly different design to Micro USB 2.0, despite being compatible if not used to it it can be fiddly.

Now the phone also includes a fingerprint sensor, certified for PayPal payments which I've not tested due to time constraints, but it's a good innovation.

A welcome addition to the phone comes in the shape of Kids Mode,
A fall-back to the success of the Samsung Galaxy Tab 3 Kids edition it's a child safe android launcher, with individual user accounts for all your children. housing a child safe app store with pre-installed child friendly music player, camera, doodle pad and gallery. to exit kids mode you need to enter a pin code, if by chance the little angels lock the device out a quick login to your Google account will fix it.

In Conclusion the Vodafone Samsung Galaxy S5 and Gear Fit are a great duo for both every day use and improving health and well-being for everyone thanks to the wide array of applications designed for both to work together in unison. Add in the High build quality and high end components it's a daily driver even iPhone users can and have turned to.


Thanks to Vodafone for the loan of the S5 and Gear fit for the duration of this review,
Posted by imwellconfusedUK at 04:16