Thursday evening I was lurking on twitter as usual.and joined the following conversation With MumontheBrink and CafeBebe about Tesco failing.

This resulted in a  let's throw things at the store, from bananas to mushrooms. Eventually my angry bird Jebediah became the thing to throw.
(click image for larger) 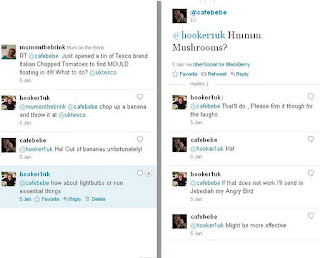 Like a strange dad I accepted the challenge. (yep think meme's here)
Roll on friday morning and we begin launching Jeb across the floor, and avoid getting bollocked by staff. How? Because I'm the boss baby!

The Mission was a success, no removal from store and we didn't lose him. and kept a fair few people smiling during the mini throw session.

Disclaimer Leave the stupid stuff to me, as it could get you kicked out.
Posted by imwellconfusedUK at 15:06