How to make a monster smile with a "new" toy 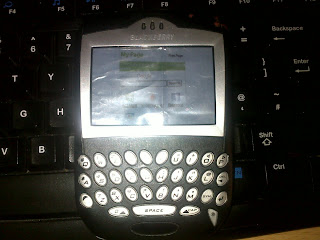 Meet my Blackberry 7230.
Sadly me and Blackberries have a death-curse where both of them i have owned they have broke in accidents. The first one was walked on in my rucksack, the second one in Tesco's with thanks to silly lady's trolley hitting me :(
Well i had hoped to fix the newer one but never got round to it, i had also moved from Vodafone to orange, then to 3uk. So i decided to have a play about with it.
bits needed for this mod.
T6 screwdriver (present),
Anti static plastic sleeve from memory module
Vodafone Live screenshot
cardboard packing
screen removed (months ago
open it up and play about with it until it looks ok.
give it the monster when complete and the result is below :o) Glee all around. 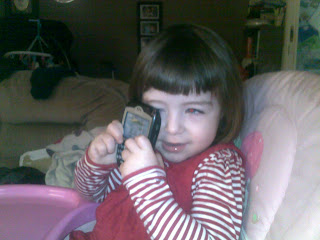 Sadly the plastic on these devices are brittle and it's falling apart now so I will have to try and blag a dummy phone from the Carphone Warehouse or Phones4U for her.
Daddys Top Tip Of The Day!
Dummy phones are better for toys over old dead devices. But the dead devices do the trick too
Night all.
Posted by imwellconfusedUK at 13:01