Hi Archos, and thanks for the replacement tablet.
But I have to say this is a bit of an annoyance now, tablet four and it's got another issue, making me wonder what tests are done on tablets when their sent out as warranty replacements

Let's elaborate in greater detail why I'm annoyed, shall I?

September 2014 The good lady buys me a Xenon 80 tablet, (When was plastic considered as sleek aluminium casing?) it was a good price with a quad core Qualcomm CPU and 3G capability built in. Works well but on occasions the screen loses sensitivity and a reboot in most cases will fix it and when that failed a hard reset does the trick. Annoying if you're working on a project and you forget to save or sync to Google Drive prior to reset.
Come December it's become unbearable, the panel is growing harder and harder to use so I send it back to Archos in January (it was late as Christmas took priority) who take it to their repair centre in France via Geodis. They send me another one a few weeks later.

The new tablet arrives and the touch-panel was never checked and faulty on delivery. tried using it for a day and ended up sending it back, thankfully they picked up via UPS this time, I'm thankful for that to be fair, from this point on they have been good, but it gets worse.

They replace the tablet with the 80b Xenon. a Mediatek based tablet with similar specs but an improved screen resolution, Android Kitkat, dual sim cards and voice calling capabilities. This worked well but the touch-screen wasn't very responsive again. A hard reset didn't fix this and I assumed it was down to different hardware until we went back to constant failures needing rebooting or hard reset.


Again Archos kindly replaced the device last week with another 80b Xenon. However the tablet came with a damaged sim card cover, the latches were snapped off. But the touchscreen worked a million times better. I would have forgiven Archos for this. Until a few days later when using the device more when the touch-screen went completely ma. Touches were not working properly, moving apps to the home screen refused to work and it was completely hit and miss.
This seemed to happen while it's on charge but once off charge it requires a reboot to fix this issue, happening with all but one charger and that's underpowered. So I have to power off and leave it to charge. Again, not ideal is it..

I do hope this won't become a constant game of replacing things until September, or for another year if its a two year warranty. And to Archos credit they have fantastic customer support teams and are quick to replace the devices and ship them back and forth but I wish their repair centres would actually do proper checks on devices before they send them out to customers.
And I'll say this now I don't want a freebie, Archos. Just a tablet I can use without fear of it failing every few months.

I've been using Archos products for a long time and the tablet is used at all events when out and about, getting people asking where I got the 80b Xenon down to it's looks with most surprised at the price direct from Archos But how can I recommend a product if they're prone to fail?

If anyone also has any ideas on what to do here, please let me know? 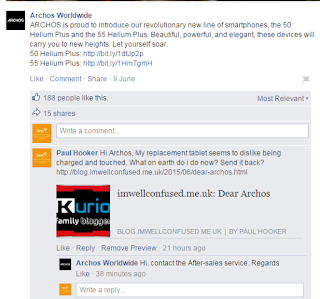 Update - On asking Archos via Facebook about the situation I got the a response as seen in the image to the right. It seems the social media team are not blessed with the same caring attitude that tech support are.

Posted by imwellconfusedUK at 06:10