Mashups: When UK Leaders have children together 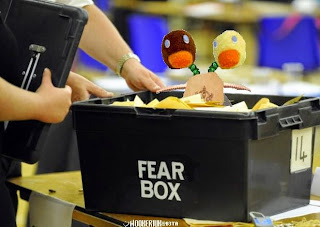 Heya all,
Today it's that ever so crucial time of the year where we get to change history for the better or worse, depending on everyone's viewpoint. Remember though - if you have the chance to vote, do so as you lose your voice as a result.
And the more I look at the polls and the information being released by the media It's looking more and more like we'll see a Labour-Conservative coalition government this evening, while many are worried about this, many Brits are taking to social media to have a jolly good laugh at the expense of all the political parties, this being where I discovered some awesome images that have been produced by MyVoucherCodes,

The Vouchercodes.co.uk team have been very busy brainstorming, creating a hilarious series of mash-ups to show the world what would happen if our beloved [SIC] leaders found themselves in a politically fuelled romantic coalition on voting night, settled down and had children. The results to me are hilarious, making me me snort tea over my monitors, while I'm sure there'll be a few "kill it with fire" comments from others you tell me what you think.

Joking aside, according to the media, we are a country that seems pretty undecided on who they choose to vote for  with opinion polls looking pretty close neck and neck for both Labour and the Conservatives at the moment. All I ask from everyone is not to sit back and do nothing, we have a small voice and when that one voice joins others in unison we're not a squeaking Mouse we roar like a Tiger.
And to those who feel their vote is worthless, many feel the same but you can make the change by voting, we all live in this awesome country, no matter who your political influence, please go out and vote today.

Paul.
Posted by imwellconfusedUK at 07:09