All Aboard the Santa Express with Max Appeal

There's not a lot of posts I begin with a video at the start but for this one it's special and I want to help spread the word for Max Appeal and also tell you all about the Santa Express to help raise awareness and offer support for people with DiGeorge syndrome and Velo-Cardio-Facial Syndrome, more commonly refereed as 'deletion 22q11 syndrome'.

I will admit now I don't know enough about deletion 22q11 syndrome to blog about it in a useful way for that I do apologise but to help educate both you and me I've lifted some information from the Max Appeal website's background history pages.


What are DiGeorge syndrome and Velo-Cardio-Facial Syndrome? 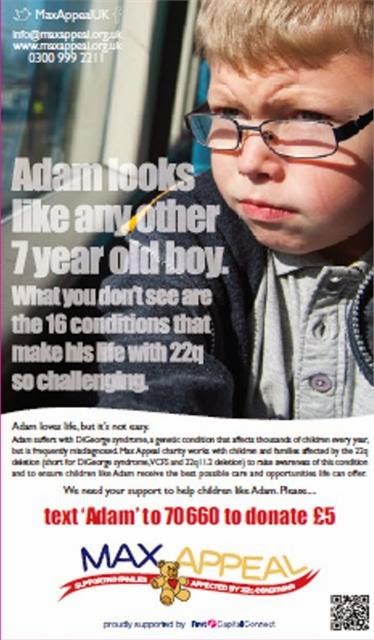 Both of these conditions generally have the same underlying cause and that is some missing genes on one of the 22nd chromosomes, specifically a 22q11.2 deletion. They are part of a spectrum of disorders that is increasingly referred to as 'deletion 22q11 syndrome'.

The name given to your child's condition very much depends upon the nature of the symptoms your child has and where and by whom your child was diagnosed. A 'syndrome' is a collection of symptoms or findings that have been seen to regularly occur together. 'Congenital' refers to something that developed during pregnancy, ie you were born with it.

Is this a rare condition?
The 22q11.2 deletion is the most common sub-microscopic deletion. It is currently estimated that around 1 in 1,800 births are affected and this rate is constantly being reviewed. It is the most common cause of congenital heart defects after Down's syndrome. The piece of missing genetic information is so small that it cannot be seen under a microscope and so a special test, called the FISH test (fluorescence in-situ hybridisation), has been developed. This has only been available in the last few years and so it is likely that your GP may not have heard of the condition. You should be offered genetic counselling by your hospital or doctor.

How does it affect a person?
The extent to which your child is affected is extremely variable and almost impossible to predict. There are approximately 180 anomalies caused by the deletion, and each individual could be affected by many (but NOT all!) or just a few or have no discernible problems at all.

It is a spectrum of disorders. Many early problems make dramatic improvements in jumps and starts. It is important to note there is no pattern to the difficulties children encounter by junior school age, for example, if your child has a complex heart defect then it does not mean that they will also have other severe symptoms.

But Paul, what does this have to do with trains? Let's get to that now. 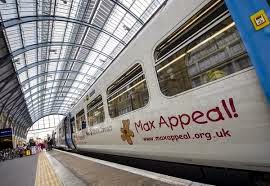 Back in the days of First Capital Connect (Now Govia Thameslink Limited) Mark Tripp a train driver worked with management to get the chance to brand one of the newly refurbished Class 365 trainset with the Max Appeal Livery and named Max Appeal. This to me is a lovely idea to promote awareness for the charity.
To quote Max Appeal Ambassador India Knight "Mark wondered how he could alert other people to the fact that this condition exists and that it not being diagnosed causes terrible anxiety, pain and suffering. A train, he thought, being a train driver. We should name a train after the charity - it's called Max Appeal, after Max, the late son of its two founders - that brilliantly supports the parents of children with this diagnosis"
On top of this GTR also run the Santa express, a Christmas train which runs from Bedford via the Sutton loop and back to Bedford to help bring awareness for Max Appeal while raising money for both Max Appeal and other local charities. The Santa Express runs on the 13th December and departs at 09:04, but it'll be popular so I suggest getting to Bedford station early to avoid disappointment.


Have fun if you're going!

Posted by imwellconfusedUK at 14:27