My feedback on the Busway

I originally wrote about the Busway a month before it was due to open as I was concerned about a few things and it seems despite the improvement to public transport the Luton and Dunstable Busway has bought along with it. Some of the items they've failed to implement or improve upon has become (in my eyes) a considerable concern for public welfare and safety.

Before anyone says I'm trashing it deliberately I assure you this is considered as feedback by myself with no intention to thrash the route. I just see things some people may not have noticed, on top of this I use the Busway many times a week using both the path and the buses. The Busway is a great asset for all the local communities it connects to. And with it's construction it bought huge improvements to existing travel links throughout Luton, Houghton Regis and Dunstable with a reduced cost of bus fares if you choose to exclusively use the Busway.

It's fair to say that the busway has not been without it's share of both minor and major teething troubles along the way, but to be fair it's less than a year old and I would rather the problems were highlighted and fixed sooner rather than later in my eyes. So without any more rambling let's get onto the feedback.
I'll Highlight problems first (Sorry it has to be done this way but these issues are small compared to the Cambridge Busway cockups) then a suggestion my daughters suggested to me recently.

Now onto the snags that were promised to be fixed in an exhaustive snag list, heck I don't know them all.
CCTV and lighting.

We got a GSM/3G Camera on a bridge, bus stops and busway entrances. But not the promised ones across the rest of the busway and the infamous Dog Kennel Walk/Down (depends on the age of the person I've been told) Yes Route6/ Dog Kennel is the route that crosses the busway via the bridge. This was tidied up but no extensive upgrades ever undertaken. Similarly to the Busway footpaths. They have no light or CCTV bar on bus stops and the entrances to two housing estates on the Portland Ride stop, old lights on dog kennel that light the crossing of the Busway Path and Dog Kennel but that's it. Oh I forgot one set of lights by the Jeans Way crossing point. but it's merely a LED light or two so the drivers see people dart across the track. (to those who complain about some of the original gates bear in mind some are there to stop accidents like this one in Cambridge but not all of them the rest to stop motorbikes.) These being missed out mean certain areas are dangerously dark and due to the covering with trees and bushes tied in with no light and steep hills each side at certain points with one footpath off the Portland ride stop (High street north to Portland ride) is a concern to locals. But it's ok for now as many people people avoid this part as they made decent access via the housing estate pathways to the bus stop tarmac and well lit. Plus walking to the stop from Park Street/Tavistock street is quicker anyway!
On the safety side of things the lack of lighting is also dangerous to cyclists as bike ninjas use the route and it's not always that easy to see them even with Kree LED light setups. Even one high powered LED clusted street light every 10 meters or so would help enough without causing drastic light pollution for animals and residents nearby. 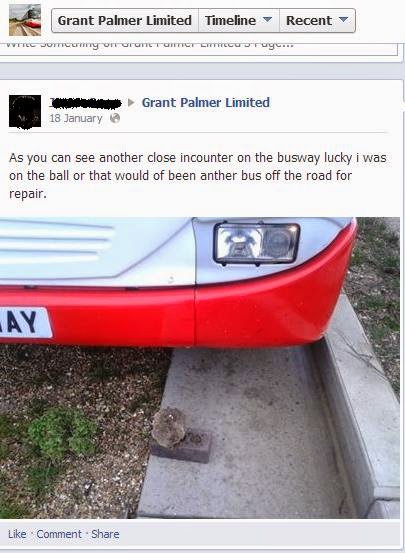 ON CCTV here's an image that was uploaded to the Grant Palmer Limited facebook page by a bus driver highlighting why CCTV is really needed out there as in this instance without the sharp eye of the driver and his prompt action it could have caused derailment of the bus and injury to people using the service and the driver too. Also costing the company more money to repair the buses.
There are other worrying reasons why CCTV is needed across the areas promised. Central Beds Council promised things would happen to make Dog Kennel Walk safer after the assault on a pregnant lady caused uproar( I know the girl and her family). They also assured residents via Let's talk central's facebook page last year that the CCTV would be installed across the route and the busway as part of it's construction and that it's costs were tied in with sustainability grants and Busway funding, adding six more cameras on NCN Route 6 through Dunstable and Houghton Regis as well as suitable cameras to keep people using the Busway safe too, I think one GSM/WCDMA camera does not cut it in my eyes. Not at all.

Next the stone pathway/cyclepath. In places it's flattening down nicely and becoming ok to ride on (by ok I mean passable. JUST) but it's still very unstable and going out of level in places and in others gaining speed humps due to the earth movement with use and pipes being underneath it for drainage in places. Some areas I'm sure BAM staff assumed it was going to have tar laid so manhole covers are raised (from where the stone begins from Chaul end lane to hatters way towards Luton before the track turns to tarmac) and have stone around them and have been since my original post. On top of this the earth has sunk at areas where you cross from tarmac to stones or vice versa the separating kerb has shifted. Buckled wheels anyone (Central beds/Luton borough council will be paying for wheel repairs!) This problems is visible in many areas where the paths change from stone to tar. 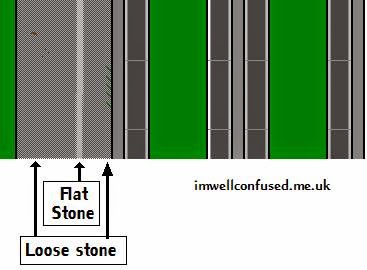 I noticed the track has a lovely flat patch on the stone where everyone rides, it's the width of one bike and throughout the stoned parts of the cyclepath. In places where this mark is not very prominent the track is unstable. BIG TIME. Taking the girls to Luton this afternoon today felt like a puppy with a slapped arse. with the stones causing a lot of wobble. Not sensible with children in a trailer. However in some of the loose stoned areas I am worried about the hidden things annoying people leave behind.

Dog walkers. I love you good ones who clear up after your dog religiously, you rock this is not about you. Where the stone is loose is brings more hidden dangers where dog poop and glass gets mashed under the stones, meaning safety issues for people and animals there. I cycle the busway a lot with two different bikes and both have different tyres but both bikes struggle and seem to attract poo. The Poop can cause blindness in children and the glass can cut people, animals and our tyres. At least on tar it'll be easier to clean.

Arriva Please run more buses on a sunday morning, it's a struggle when all of your services run from around 9AM in the morning and end earlier than normal, I understand it's a sunday service BUT A MASS TRANSIT SERVICE STARTING AT 9AM? CURSES TO YOU ARRIVA. You run a skeleton service overnight from Luton Interchange/Train station to Luton airport every night. C'mon an 8am bus would not kill you would it? Bar that the service runs well. Bar making the buses cleaner inside I have no other complaints.

Centrebus. The buses are ok, but inside they look a little shabby, the Scania's are ok but are loud, sound like their oil has not been kind to them over the years and also some many of the handrails going from seats to roof are in poor condition with three different sets of paint showing through, welded botch jobs on the odd one and hard seats But you have one good advantage over Arriva, your buses smell clean as well as look clean inside whereas the Arriva buses don't seem to have the same cleaning schedule.

Grant palmer. No complaints with you so far. with exception of no Sunday services. But it can be ignored due to the route you use. :)

All drivers are polite and courteous that I've experienced so far so no complaints here about that. 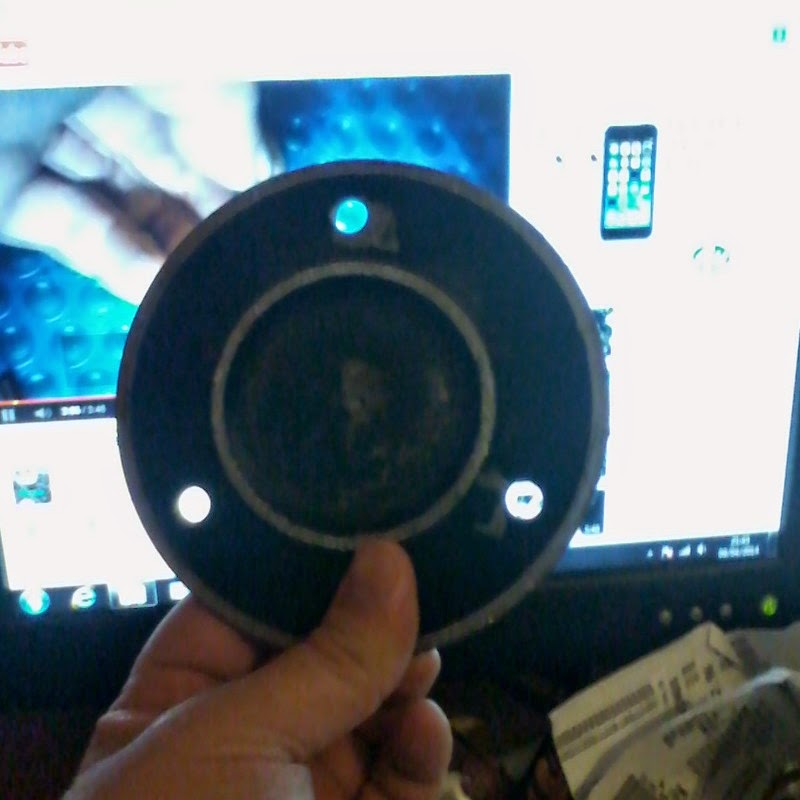 Before I forget.
I assume this is part of a guide wheel from the Busway. I found it this afternoon by the Chall End Lane - skimpot approach guide rails. I assume someone' hit the metal guide too hard and part of the wheel failed. If you want it back let me know and I'll leave it at the Travel Hub 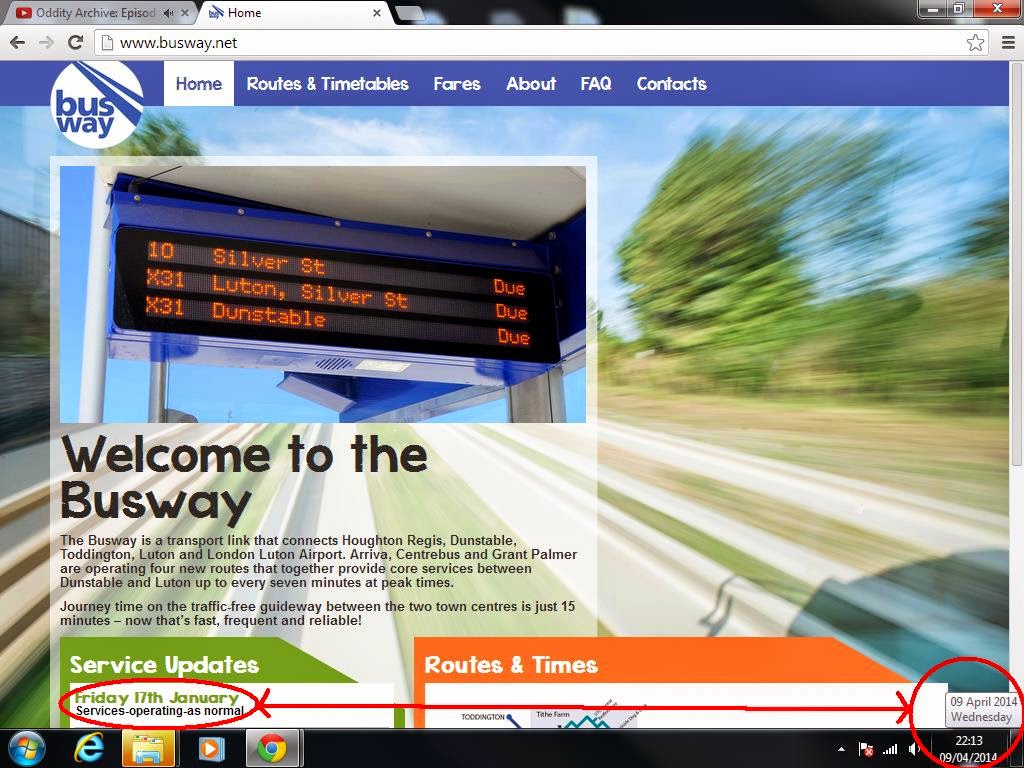 Oh and a few more things that need sorting. The Busway.info site thinks it's January and runs excruciatingly slow and this is on a stable 80mb line.

The Vix LED Matrix displays are weak a slight tap and they giltch, I've seen someone showing their kids what bus to look out for by touching the display and it goes black, comes back with half of the text on one line missing.

Also the LCD Panels at Busway stops where the display is in direct sunlight highlights a huge issue. Sunspot. The monitors go black and cannot display until they cool down or get the ability to work. the AOU Panels seem to not have adequate protection from UV rays being beamed from the sun and the sun itself.  Also the Data on the VIX Lcd Panels shows incorrect news. We're not in Tyne and Wear. We're in the bbc 3 counties news area!

Gates. What good is it to have them when they are held closed with BINBAGS?

I'm not expecting miracles or to see anything highlighted fixed in the long run but it would be nice if this feedback is taken into account by the councils as a whole and the bus operators who also use the busway.

Now for my daughters idea.

There are a few bridges the busway goes under, including Dog Kennel bridge. The Dog Kennel bridge soon got named the Troll Bridge by my daughters on one of the many times we pass through to school, friends houses or just passing through to the adventure playground. The Troll was based off Dora the Explorer and I've played on this with the girls every time we pass it via bike or bus. To be educated on the Dora Grumpy Old Troll watch the video below.


Now on using the cyclepaths we've noticed the new Dog Kennel bridge has ledges below the bridge and manholes each sides of the track. The girls asked me if the Troll and his wife live in their home under the busway and the front doors are the manholes on the side, placed on both sides so they don't risk getting run over by the buses.

Now with that in mind they want to see the troll living under the bridge, be it a painting on one side or a wooden/card cutout. It would be a fantastic addition as it would add more attraction to the busway for kids. But not just Dog Kennel, how about they paint the Chall end lane underpass/bridge with artwork from local communities? It could also be pretty cool to decorate some of the fences that face the buses to give kids more to see than the hunks of metal murals, trucks, cows, horses and lots of people, bikes, dogs, occasional cats and the odd car or service vehicle!

Other users have ideas too! Ask them and help improve it!

Clive has a good point here as they're not all working well, one of them by the crown was showing inaccurate data for a service that does not even run past it, but they've turned off the old RF display too so there is no decent real time info available.

Paul
Posted by imwellconfusedUK at 15:35