This week I've been busy building. Nope not computers, a Tardis. My daughters school runs a yearly bike parade. This year the theme was Time machines. The event ties in with the school's May event.

On discussing it with C, the caretaker the tardis came up and a challenge to mount one to the trailer. You know what that means people.

IT'S ON MOTHERLOVERS!!!
I go home to be told I'm mad (and proud i admit that) and I begin.
On Saturday it's finally complete, still damp but attached to the bike just in time! 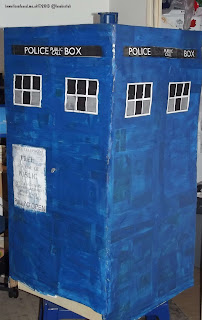 Built with a wooden frame, wrapped in cardboard and paper mache. Like i said, still damp on attachment. 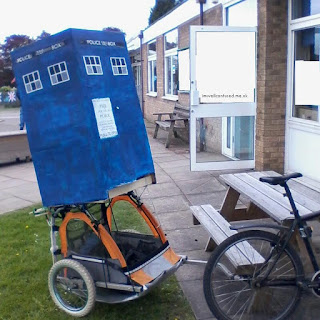 I will admit i've never cycled so slow to transport anything, But the end result was worth it.

The fete was a roaring success and many others bought amazing time machines and tardis' (or tardii?) including one completely made by two girls. It was awesome. I wish I'd taken photos of it now.

Sadly the day went and the heavy rain began.
After the third soaking the tardii began bleeding. Well, the paint began to run.  leaving a huge trail of blue everywhere and a sticky trailer for me to clean up. (i best do that soon)

I bear a challenge next year. Who wants to join in with me? 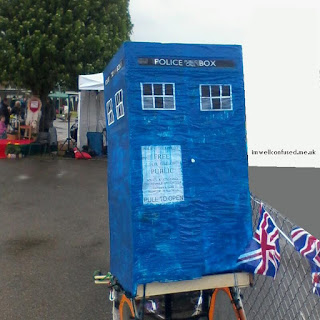 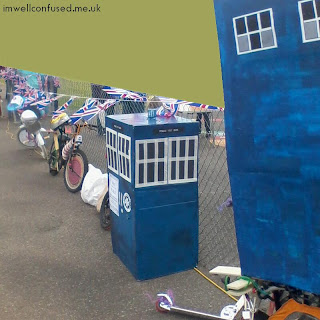 Posted by imwellconfusedUK at 07:03