Many moons back I posted a DIY bike mount for you all to try. It's time to ditch that idea.

However, things change, mobiles are worth more and many people have Super Mega Hyper 4Inch IPS superphones which do anything and everything bar throw the kitchen sink at you, although siri possibly would if it had hands I suspect.

I had been looking at bike holders online, many of which comprised of those $2 tat fests and resold with a clamp bolted on to attach onto the bike, most break and need a rubber band or ten to stop them from falling off. However Rutland Cycling comes to the rescue by sending me the awesome Rutland Cycling smart phone holder.

I've used the holder with the following devices over the last few weeks. 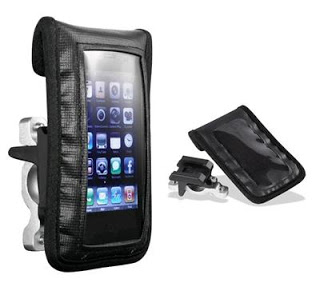 The only problems I had with the holder was due to it's generic nature there are no dedicated headphone or charger holes, which would be useful, but at this price point It's not an issue. (also I use a bluetooth kit)

Secondly this is not recommended for devices with a screen larger than 4 inches. for instance the Galaxy s2 just fits the display in view.

If you cycle a lot, I recommend this holder. it's durable, waterproof for both light ans heavy showers and mud attacks and compatible with devices up to 4 inch screens. It is fantastic value at the price of £6.99. I've seen a similar holder for £20.00 and you needed to spend another £20 for a dedicated device specific pouch.

Go for it. You won't regret it

Posted by imwellconfusedUK at 13:47