Lets get one thing straight before this rant goes on.

I've been refurbishing computers for years, offering them for free to people in greater need than myself. In some case I've taken parts from my computers to help other peoples computers run again so I can give them to those who could benefit from a computer. I've done this for years now. and freecycle dunstable is the only group In a while I've had issues with. (that said I left the luton group for similar reasons a year or so back)
Additional I do this voluntarily to help others, as there will always be others in greater need than me.

I've been contacted by a charity group who I will leave out of this as they asked me for help for one of their group users. this person's computer popped, nearly causing a fire in their property. They explained the computer is dead, but some components look ok and the hard disk seems undamaged, which will be fab if that's the case for the person invloved.
Sadly I've run out of machines to offer up as they come in drips and drabs. In some cases I'll be offered two or three and be asked to fix one for the person who gave me them all and recycle the rest. Usually getting all of them working with some chopping and changing of parts, unless unsafe to do so.

So i pop onto my local freecycle group (freecycle dunstable, if your wondering) and do the usual post, which I've done in the past explaining why I am asking for what I have asked for, mentioning how some are recycled through charity contacts within certain groups, which has never been an issue before.

Tonight I get told the following (click to see) 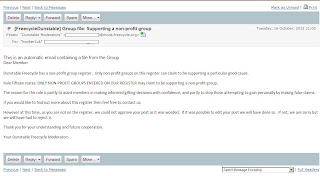 Before some smartarse tells me I should have registered as a non profit org. I inquired TWICE, got an auto response email and never heard anything else from the mod team. Also in looking through the reggo process it seems I would have to become a registered charity or get charities to employ me to do this. which in many cases is not in their budgets.

I've read the re-edited post they replaced mine with which now sounds like nothing i post on there EVER.
Hence i've replied back asking why they refused to contact back on registration for non protit register status. and why they edited the post in the way they did. I doubt i'll get a response.

I have since left the group as again it's one rule for those who want to ask for the world. (Iphones, xbox 360, flatscreen tv's) But when someone tries to make a difference they get shunned on there.

I offered a laptop computer on there which I was given for parts, The original owner works with charity groups as do i and he responded on a post on there when I was looking for memory for a laptop (ZOMG looking for old memory for my old laptop shocker - how selfish)
I took the laptop and i could not use the memory, but got it working. fixing it and re-offering it to the original owner for his group, he asked I put it on freecycle as the group had recently been donated 25 new laptops from a school.
I posted a offer on Freegle leighton buzzard and Freecycle Dunstable Both identical posts. As the machine had faults with it I am always truthful on the state of a machine, so people know what they are getting.

The post was rejected 4 times automatically on freecycle, and posted instantly on freegle.
The reasons for rejection were
Too many capitals
Too long description
location too long (certain areas would probably not fit in this then)

The freegle post I got mostly polite emails, bar a few "yes please" messages.
Freecycle I got guilt trips, people demanding i give it to them now, asking can I change my mind and let them have it sooner. I was even called racist by someone who did'n't get the laptop.

I should have known to stay with freegle then. I must have idiot on my head.

For now it seems some people will no longer have the chance to get a refurbished pc thanks to this.
Oh well. Must carry on i suppose.

to the freecycle dunstable mods. I left the group, i don't care about your draconian moderation skills anymore, you moderated my posts asking did anyone have ddr1 memory to swap for DDR2 and DDR3 ram. (I was giving away the more expensive stuff. idiots) Even the asshats at Cableforum do a better job than you at moderation. that is saying something. SERIOUSLY!

Posted by imwellconfusedUK at 14:46