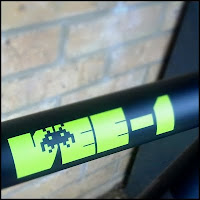 A few of you know My bike is my car, my fast track from A to B. It's my wings.

When my GT's repairs became more of a money pit i was comtemplating replacing betsy, my GT has many amazing memories, including two balls of steel events, taking supplies to my partner while in hosptal, and taking my beautiful daughters on there special seat to school, the chiltern hills, or even better, falling asleep feeling safe to be with daddy.

Eventually i knew I had to plan to buy a new one, which stood out in many ways, but also for one word, VEE. 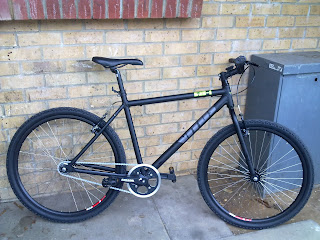 Initial thoughts were wow. Less to go wrong, and works harder for less effort, 30mph on flat with no effort. She (the bike) handles differently to the GT but that's to be expected. Even if it provides the odd bout of shits and giggles thanks to the transition of fully working brakes and a single speed. Even overtaking lorries at high speed proves to be, at times an easy experience. Even if it leaves me wheezing more than my little netbook. In the next few weeks I will throw it off Bison Hill, Whipsnade to see how good the Kenda rubber holds the roads on twisties.(did i mention shits and giggles?)

Everything was going well until day 7 on where I heard a creaking noise from what i thought to be the pedals on day 7. No worries, i thought. Reviews stated the pedals were a tad rubbish, so i'll try a spare set......... Still creaking.... Funge. My bottom bracket is shot i panic, a tad miffed my litte trailblaizer is already maimed but at least I get to finally sample Chain Reaction Cycles customer service.

So, I called Chain Reaction Cycles for help.

The staff are more than willing to help, offering to pick it up and check it over for me, Parcelforce is arranged. Sorted, we both think...... Nothing. So, I call them back on wednesday to hear there was an error there end, so they will call me back. Sadly they did'nt call back. They did seem busy, and cockups can happen. On thursday they tell me it's arranged for friday pickup. Fine, it's going to be fixed, huzzah.

Friday came and the parcelforce guy refused it, the parcel was in a bad state, the box had been outdoors for a week before the fault emerged, which was disclosed to CRC. Keeping a huge box is not easy in a small flat.
the gent from parcelforce told me he would come back if he was allowed to take it, while i fix the issue for him, which I started in front of him. He didn't bother calling back, leaving a refusal on the note.

B this point i can't call the company to ask for advice as there line is closed. No worries. Call on monday feeling a bit wound up. They try again, nobody turns up at all. This point I was miffed, they (CRC staff) were miffed as they had paid for pickup's Despite Parcelforce giving them dispatch numbers and chasing it up the CRC team Decide it will be easier to get it sorted locally and refund us for the inconveinence. So, after all that my vee1 is now repaired, the local shop, Cycle Life Dunstable had it sorted for a lot less than other companies, and found the diagnosis as simple as components requiring tightening. Meaning it was fixed by school's out. And ready to transport Vee on the Vee 1 again with a lot more style than the Clunky GT.

True to CRC's word they have refunded the cost of the repair. (If i knew it would cost as little originally i would have got it fixed without calling them) and despite the one forgot callback, everything was handled perfectly well leaving us feeling more than happy to spend money with them in the future.

Thank you to all the CRC team, and to CycleLife Dunstable. You both rock with great customer service, and exceptional for servicing and warranty work. And for bikes choose either of them. They both rock.