Hello Everyone! :)
It's been a while and many a problem to sort out behind the scenes so for that I apologise.
But, as promised. Part two of the optimus one review is here. 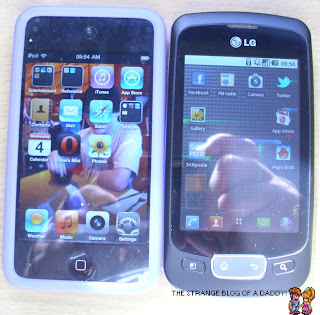 The LG Optimus One's is a darned sturdy feeling device. with power/lock button and headphone jack on the top, volume rocker on the top right and four buttons on the front of the device and last but not least the capacitive touchscreen.
On the back of the device is the 3.15mp Camera which comes with autofocus and without flash

It's Rocking Android 2.2 with flash support, and as previously mentioned LG have been quite good not to customise without making a hash of it. Looking at the home screen it's tidy and scrolling between the 5 or 7 home screens (you choose) brings a fluid scrolling experience .

The menus still confuse the daylights out of me, as basic things i would expect in a menu are buried in other parts of applications and settings. That said I've only JUST got used to using the text input on the device. 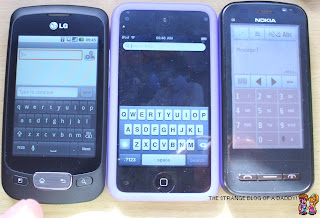 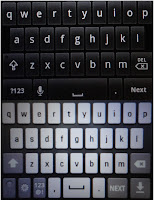 As were here lets move to inputting text on the device.
The device has three keypads installed, the LG Keyboard and Alphanumeric and the Android default one, the image on the right shows the android default at the top and the LG one below.
I admit the text input is an enormous learning curve, as I'm used to belting it out on a slide out keyboard has proven to be one of the largest learning curves I have to overcome, and the experience nearly killed the whole feel of the phone for me, but this in fairness is due to my learning experience with the handset, not the phones fault. And last night I spent a good few hours playing with the keypad to master it. 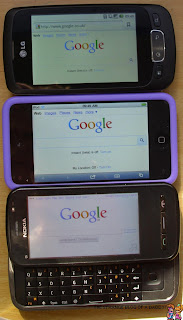 Now, lets move to browsing.
The browsing experience is a pleasure. An experience compatible to the iPod touch, We did have he occasional wobble with flash content, although this was due to Adobe and it's partners delay in sending the update. But this does not kill the experience, in fairness it works well, Google really have done a good job with the browser.
The device has shown me that a lower end device can trump the competition and do it spectacularly well too even with a few quirks like the lack of interactive flash content and youtube content, though the latest flash update is on the way.
Using this for social networking is a dream. Youtube, Twitter and Facebook work out of the box. slap your details in and you're good to go, with all applications feeling quite complete, and no feelings of slowness or instability, well. Until I play games then we see an issue.

For instance Angry Birds by Rovio. This can work perfectly, then suddenly grind so a crawl. in a way it's reminiscent of playing Doom on my first pc. Slow and painful at times but still fun.
in fairness I feel the advertising in the app are the problem there. (if LG want me to keep the device I may be able to try more paid apps)
It's a good performer there, but there are newer devices that will outperform it in more demanding tasks, but for the price it's good!
One thing that amazes me is the Wifi connectivity. it's rarely failed me at all. even connecting to free providers with ease. The configuration is confusing but works well.
The camera is a good performer. I would say it's in par with the Nokia E71 without the purple hue. (images will be on flickr soon, I'm still tagging things now)
Music and video quality is spot on with this device, coming from the LG headphones or my Sony high end set both bring crisp audio with the right amount of bass.
Call quality has been strange. Now I use a Vodafone Sure Signal inside the flat, giving a HSDPA signal inside the house, as n extra mast. Now at times it dislikes the witchcraft of a home mast leaving call quality as useless, but the rest of the time it's sharp and crisp. they have done an excellent job on the voice quality on this device.
Now for the important bit. Would I buy this?
I would say Yes, yes I really would. It works flawlessly. any problems are mainly my learning curve, and it does show from my use it has to be doing something right to sell over a million devices. so Top Work LG.

I have to say the Keyboards Image is not mine and is from the following blog. Please go and say hello to Miss Tin A Pie as a way to say thanks
http://misstinapie.blogspot.com/2010/12/urban-adventures-switching-to.html
For now Part three is coming. the final chapter of the LG optimus one. My final thoughts on this device.
For now - PEACE!
Paul :)
Posted by imwellconfusedUK at 02:24

Labels: ace, android, does it compare to an N8?, LG optimus one, Part two, Review