Hello Everyone. It’s time for a very funky toy review. 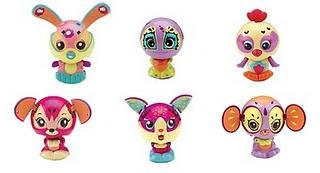 Zoobles are small collectable toy’s aimed at girls aged 4 and above and created by toy maker, Spinmaster Toys. The creative geniuses who bought us Moon sand, Bakugan, Tech Deck and many, many more great toys.

To help describe them more I scoured the internet to look for a Zooble Promotional Video
(This is a foreign, but English spoken advert. if spinmaster have an additional one to provide i will use it)

Zoobles are small collectable toy’s aimed at girls aged 4 and above and created by i with toy maker, Spinmaster, the creative geniuses who bought us Moon sand, Bakugan, Tech Deck and many, many more great toys. 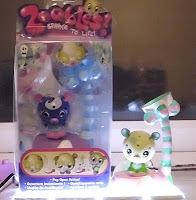 This is How the Zoobles Are packaged. - Not bad at all.
(Apologies in advance, I forgot to take a photo of the box before I opened it. )

before we had the opportunity to review a Zooble the girls had both gone crazy over the ad’s for Zoobles. V asking for ‘My birthday present’, and Lissy asking ‘Mine?’ The day I received the email asking I had just reserved one at a local toy shop.

We received a Zooble a few days later.

These little creatures are designed to pop open at random on there Happitat and sleep in a ball on the tower above the Happitat.

The Happitat is the Zoobles home, where they pop up, play, dance and sleep once there playful day is done

Zoobles come in many shapes and sizes, with many different Happitat’s and environments to play in they are an ideal toy for girls from as young as 2 Years, but the manufacturers have a suggested age of 4 and above, but seeing as my children are 2, 3 and 11 and get along fine with them. Most kids will be fine with them. (keep in mind there are small pieces, so supervision is important)

They are priced quite well starting from £5.99 for a single Zooble and Happitat, a Twoble pack for £9.99 and the Blossoming garden set for £19.99. Spinmaster could have thrown them up at a premium price for what they are, pricing them out for many children with pocket money.

Yes it may sound a bit steep, understandably I see this but in this instance you are getting what you pay for in terms of intricacy, mechanics inside and the over all user experience

Once presented to the girls we immediately saw a problem. The girls were territorial over the little Zooble, and it was clear they both wanted the poor little creature. As a result we purchased another one to equal things up.

Snowy is very similar to Acrty, and has a near identical as they can be, but in purple. To both have one made both Lissy and V very happy, resulting in sharing again.

Sharing aside I have to say they are so intricate little creatures, I worry I’ll break them when investigating them, but so far seem very solid. And the tiny magnet powered mechanics inside show how complicated toys have become over the years without making the over complication obvious to children.

I asked both girls about there Zooble this is what they said.

V: you bought me one too. You’re the best Daddy. But you got me one, daddy it’s great and your the best! (her words when I got home today)

Now In fairness they get a lot of use out them already, in the time we have had them there has been plenty of swapping, sharing, throwing them (NOT Recommended)

So far the little Zoobles have been well played with and I can recommend them to anyone from Ages 2 upwards, providing supervision is possible due to the magnets inside these toys.

One more thing to Add, Zoobles.com is the exclusive portal to see and play with other Zoobles, and register your Zoobles with there code on there bottom. to interact with them online. (Registration and parental supervision and permission is required) More on this soon.

So for now - This is Paul signing off on a late Evening
See you all soon :)

Posted by imwellconfusedUK at 08:39