To see the other parts of this four part review please click the images below!

We made it to part Four! WooHoo :)

Wowsers, what a great day Thursday was!
As I was leaving to go out we had a knock at the door, with a parcel of mahoosive proprtions.

Sadly i had to rush out on the school run, leaving Jessie to open it up.
Upon opening the box revealed the Maclaren Dandelion Jr. Quest Activity Centre. (pictured below) 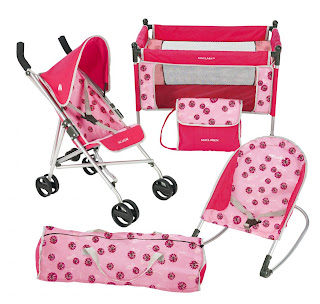 From here Jessie will review it from un-boxing to the children's initial thoughts.

The box arrived yesterday during a massive paddy by Lissy, we decided to open the box, the box itself was easily opened, another plus point is the package as a whole is not over-packaged, we like that, lots!

Setting it all up. One word - WOW!
Putting it up was a breeze, without even looking at the instructions, although this may sound obvious to many, I've never owned a buggy like this easy to set-up. This was an immediate plus point.
Another was how sturdy it locked together tightly, as a result little hands couldn't collapse it and accidentally and hurt themselves.

The little bouncer is adorable, and with V and Lissy being of different heights seemed to love how adjustable it was for each toy.
And now for the crib. Now if only travel cribs went together as easily in real life. Again, it was a so easy to put together and is very rigid once together and able to take the weight of a Lissy, who thought it was for her to sleep in. More photos will be on my Flickr stream soon!

Initial reactions from the kids we're amazing, It was if Christmas had come early!

Straight away Lissy's favourite soft toy. Roo, went in the buggy and off they went to the 'shops' with the
'mummy' changing bag as they've labelled it.
Then Roo needed to have a sit down and experienced the bouncer. here Lissy needed help as she could not do the straps on the bouncer or buggy. But our older daughter, V could with ease.

Before long, he was back in the buggy to go wake the V up.
For once, V woke up without a moan as she realised we had some new toys for them to play with. Within moments worked out the straps on the buggy and bouncer and how to adjust the bouncer for her 'tig and lulu'.

What amazed us too was how the set enabled them to play together, where they would argue over the other toy pram we have, always resulting in a strop from one of them.

Myself.
I found the design of the set lovely, the different shades of pink and the Dandelion looks really impressive, also the build quality of the toys is wonderful. and setting up/installation was a breeze.
Although it says from 36months + on the box, both girls have had so much fun with he set already. and it's been less than 24 hours! So its suitable for a wide range of ages, although the younger ones will need help with the straps but even then the way the straps are designed mean that there's not alot of risk of little fingers being caught.
Also as I previously mentioned the crib itself can hold quite a bit of weight, but this is not advisable.
Our daughters aren't the most gentle of players in the world when it comes to toys. But so far this set has held up well to the knocks they have given it so far with no dings or scrapes, also appears to be easily cleanable.

Daddy's point of view
On this note there is not much more to say really bar the set seems to have engaged the girls attentions, and they are more than willing to ignore other toys.

Again, the build quality is top notch on the initial look over of everything. And as Jessie noted it looks of a high build quality I expect it will stand up to a fair few knocks from our monsters!

The Maclaren Junior quest activity centre is available direct from Maclaren. but if this is too far to travel they have provided a lovely store locator so you can find your local authorised Maclaren reseller.

Come back on Monday for the next Instalment of this four part special.
Paul, Jess, Lissy and V
Posted by imwellconfusedUK at 02:41